How it all began

The existence of this cave has long been known to the local population. In the middle of the vineyards it could hardly escape the notice of the vine-growers who used to cool their bottles of wine in this cold mysterious water.

However, no one is known to have ventured into its depths, undoubtably due to a lack of means and to superstitious fears inspired by the unknown subterranean world.

In 1943, Jean-Jacques Pittard, accompanied by Jean Della Santa, used an inflatable boat to enter the cave. The two explorers were amazed by the size and beauty of the place, they landed on the beach at the far end, visited the far most cave and returned.

In 1949 the lake was opened to the public as a result of the efforts of two young men of St-Léonard. Since then, a lot of work has been done in order to offer more and more comfort and safety to visitors.

Today the cave is remarkably illuminated and very easy to reach. Several boats are available with guides to point out the sights and answer the various questions of the tourists.

Geology - to the origins of the alps

The “Lac Souterrain de St-Léonard” owes its existence to the superposition of phenomena specific to geology, plate tectonics, hydrology and its geographical location. Its formation took place in several stages and is still continuing today. It all begins with the appearance and emplacement of the three rocks surrounding the lake. The north face is formed of black shale or “coal shale”, a rock of Carboniferous age (more than 300 million years old), while the south face is formed of marble, “the stone of St-Leonard”. These two rocks, totally watertight, will allow the lateral retention of water inside the cave. Placed in the middle of these two rocks, we find gypsum or “plaster stone”, a sedimentary rock, porous and soluble in water over time. This gypsum, which appeared 220 million years ago, when Valais was just a vast ocean, would have been pushed between the marble bar and the shale bar during the formation of the Alps. While the appearance and emplacement of these rocks took place over several hundred million years, the excavation of the cavity, by the action of water on the gypsum, is thought to date back only a few thousand years. One hypothesis even suggests that the erosive process began in the post-glacial period, less than 12,000 years ago. Runoff water seeps through the permeable gypsum, favoured by the numerous cracks caused by the frequent earthquakes in the region, and also by the geographical location of the lake, at the foot and on the side of the mountain. These waters descend along the slope and infiltrate underground through the gypsum, forming, by “dissolving action”, underground channels. Over time, these channels expand to form wells that bring and store the water deeper. These waters will cause a phenomenon of “desquamation”, forcing the waterlogged gypsum to swell in volume, causing it to detach and collapse towards the bottom of the cavity being formed. This erosive process allowed the formation of the “Lac Souterrain de St-Léonard”, whose dimensions are still expanding today. 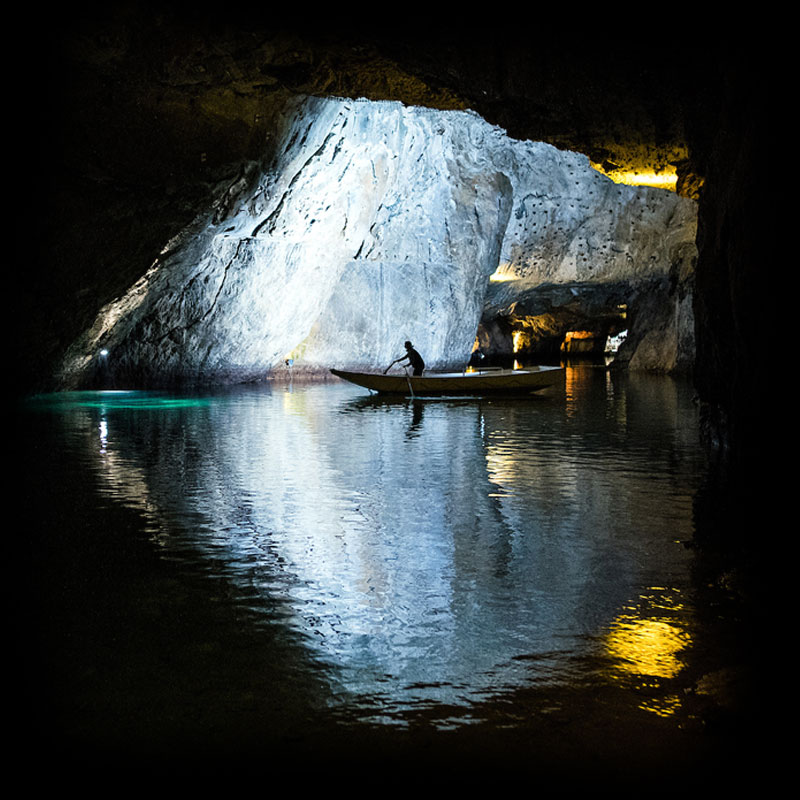 hydrology - at the headwaters of the lake

The water in the “Lac Souterrain de St-Léonard” comes from different sources. As it is located between 30 and 70 meters below the Leonard vineyard, water from the watering will infiltrate through the gypsum to reach the lake. This irrigation water represents a very small part of the total water supply. The main contribution comes from the “runoff” of rainwater and snowmelt. This water flows down the slope of the mountain and begins its infiltration process when it meets the gypsum. There are also believed to be underground springs that bring water directly into the lake. These springs are especially active at the beginning of the season, when the snow melts at high altitude. All the water that arrives in the cave passes through the lake before escaping through cracks located mainly under the loading dock, towards the water table of the Rhone plain a few meters below.

In the surrounding area

Any cookies that may not be particularly necessary for the website to function and is used specifically to collect user personal data via analytics, ads, other embedded contents are termed as non-necessary cookies. It is mandatory to procure user consent prior to running these cookies on your website.